2022 Junior Lord Mayor Competition entries open in June 2022, with thanks to 13cabs. Check back for details.
Get a reminder in your inbox: subscribe to our newsletter ⇾

"I also love the community of Melbourne. Everyone in the CBD although doesn't know each other personally, supports each other in times of need. This is the community spirit I value in Melburnians."

Daniel, 12, who's also a pianist, impressed at a judging ceremony held via video link and live streamed on the internet.

Cracking down on litterbugs and helping those doing it tough in lockdowns.

"There should be more emphasis on mental-health programs and helping those in need with help lines and counsellors, and foodbanks for those who need it."

'His Worship' holds the ceremonial title for a year – getting to rock mayoral robes and gold chains, march with competition finalists in the Moomba Parade, perform official and fun duties with Cr Capp and more!

Now in its ninth year, the Melbourne Day Committee-run competition aims to raise awareness about Melbourne and our city's incredible Aboriginal history and culture – and instil civic pride by highlighting our journey since being founded on 30 August 1835.

What are the big issues for competition entrants?

"Many called for mental health support for those struggling with Covid lockdowns," Campbell says.

"Several wanted more Melbourne and Aboriginal history to be taught in schools, which brought delight to Melbourne Day Committee's office," he says.

What do they love about Melbourne?

"They praised the variety of sport, theatre and arts offerings," Sue says.

"The Grade four, five and sixers (aged 9 to 13) clearly march on their stomachs, raving about the city's food culture," she says.

"And they wouldn't be true Melburnians without mentioning the weather, with one loving our city's 'five seasons in one day'."

Each finalist wins a prize pack, a framed certificate/trophy and other goodies.

Thank you to everyone who entered, and teachers and parents.

"It's such an important program for helping people understand how the city works." — Lord Mayor Sally Capp 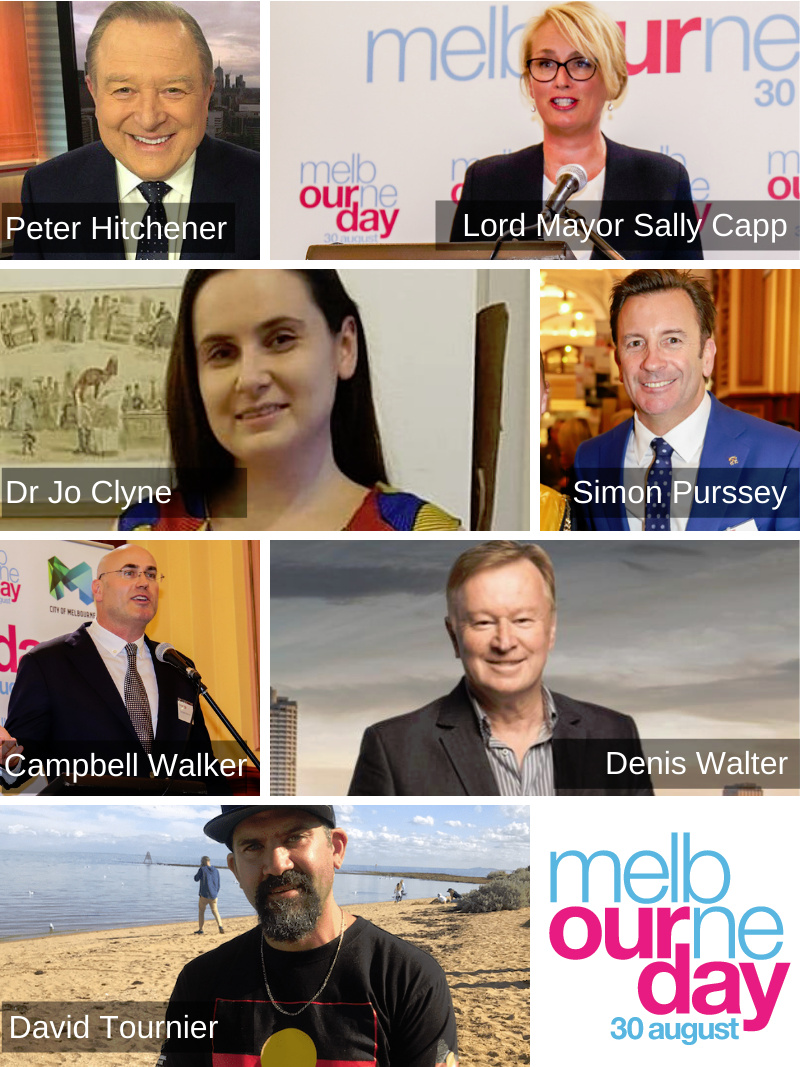 Simply use promo code JLM21 when you download the 13cabs app from the Google Play or Apple App Store (iTunes), for your chance to win.

It helps support the program, now in its ninth year. 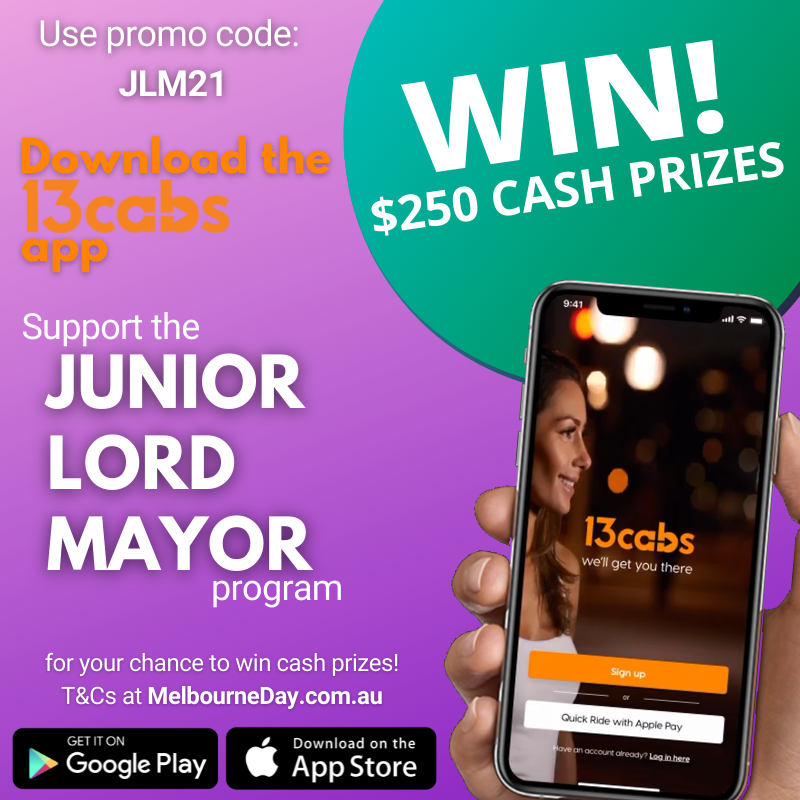 At a special handover ceremony at Melbourne Town Hall on 3 August 2021, Alicia donned mayoral robes and officiated at a morning tea. During her mayoral year, her worship urged Melburnians to focus on their mental health to help survive Covid lockdowns.

She also got – as is customary with presidents, CEOs and high officials – a personal letter from outgoing junior mayor Sophie. 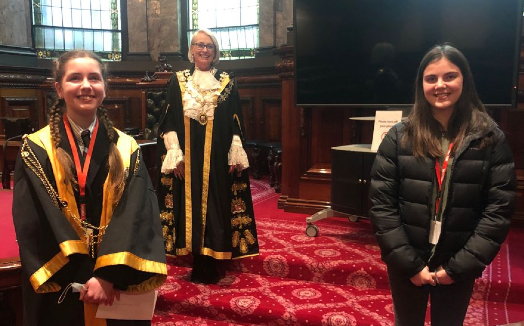 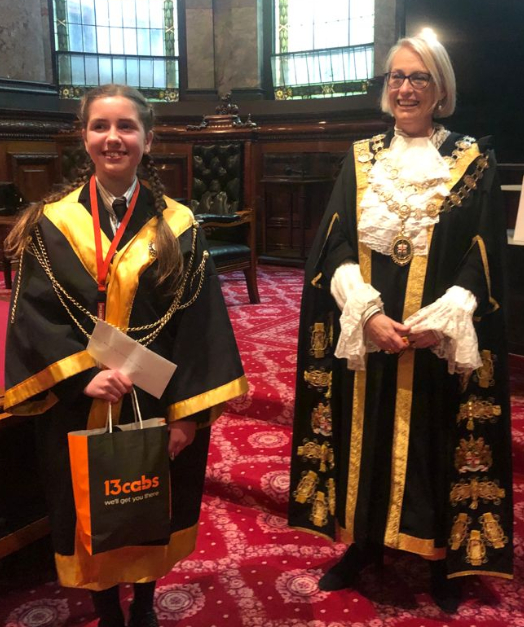 The resources and ideas below can be used in classrooms, child care centres, kindergartens — and by parents at home.

Ideal for students in Years 3 to 6 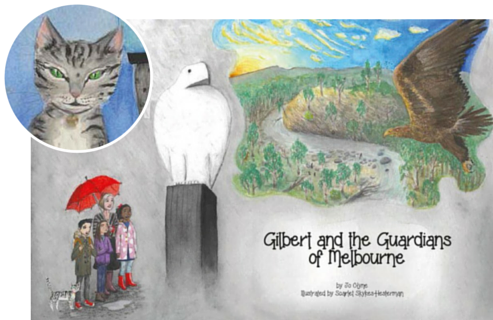 Primary school students will love learning about their city through the eyes of Gilbert, Melbourne's first cat — the Tassie tabby who arrived on the Enterprize with the first settlers.

Gilbert and the Guardians of Melbourne tells the story of Melbourne, including Aboriginal history, via a series of city "guardians", or historical landmarks, representing culture, industry, events and other elements that have shaped Melbourne.

Gilbert takes you on a captivating journey, explaining in a fun and engaging way the story of how Melbourne started.

It is suitable for use by students in Years 3 to 6, and features a variety of activities to get students thinking and embracing history.

It comes with a separate Education Kit support guide (see below) — for teachers to get in classrooms the most out of the e-book.

Developed by Dr Jo Clyne at History Teachers' Association of Victoria Opens in new window and Melbourne Day Committee, the colourful e-book is ideal as a teaching aide and an activity for parents to use at home — to bring to life the Melbourne story, and capture students' imaginations about history.

Or read Gilbert and the Guardians of Melbourne in your browser as a flipbook.

Bring to life the Melbourne story and captivate students about history 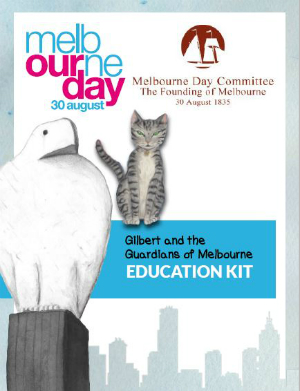 Education Kit: Get it now! (PDF)

Why teachers should use Gilbert and the Guardians e-book

Author and historian Dr Jo Clyne explains why the resource has impact in classrooms.

"The book encourages students to think about historical perspectives and how much Melbourne has changed over time," Dr Clyne tells Agora, the HTAV's quarterly magazine.

Bringing Melbourne Day to you

Our experts visit schools to talk about the city's founding, the Junior Lord Mayor Competition, how students can get involved, and more!

Get all your students' questions answered. Incursions are free thanks to Melbourne Day Committee's schools education program funded by our supporters. And visits are tailored for different age groups.

Coronavirus advisory: School visits are on hold during State Government distancing restrictions. Still contact us and register interest, we'll visit you when permitted.

Learn what life was like in colonial Melbourne, from people who were there.

Discover Melbourne's criminal past, the history of Victoria's changing landscape, political events, gold rushes and the impact of the World Wars.

All this and more is available at the state library's terrific Ergo website, designed with special sections for students and teachers.

The library's The changing face of Victoria free and permanent exhibition brings together more than 220 fascinating historical artefacts, photographs, drawings, maps, letters and diaries to tell the stories of the people, places and events that have shaped life in Victoria.

Items on regular display include key artifacts such as the Batman Deeds, the last notes of Burke and Wills and Ned Kelly's armour.

Discover also the colourful story of jam making in 19th-century Marvellous Melbourne, see early photographs of the Princess Theatre, and learn about the often-forgotten role of women on the goldfields.

Located in the library's Dome Galleries Level 5, the exhibition is open Friday to Wednesday 10am to 6pm, and Thursday 10am to 9pm, except for public holidays.

The exhibition has been transformed into a virtual tour to explore online. Discover more than 150 objects, artworks and photographs that reveal the large and small ways we can all make a difference in shaping our world. 90 per cent of these collection items have never been exhibited before.

Also, discover the people and events that shaped Victoria's colonial history in the library's "Colonisation" online gallery, including:

Did you know? The Gold Rush in Victoria made Melbourne the richest, fastest-growing city in the world during the 1880s — earning us the enduring moniker Marvellous Melbourne.

Free tours of Melbourne's historic Town Hall are available weekdays and give visitors the chance to learn about the architectural, social and political significance of this impressive 19th century building.

Experience the grandeur of the wood-panelled Council Chamber, stand on the portico where the Beatles waved, sit in the Lord Mayor's chair and view the richly-carved Melbourne Town Hall Grand Organ, the largest grand romantic organ in the southern hemisphere.

Education with altitude! Eureka Skydeck 88 offers school trips to the highest classroom in the southern hemisphere.

The landmark offers a host of educational activities and fascinating facts from the interactive displays on offer.

An education co-ordinator can help plan the specific learning needs of your students.

Things that go bump in the bushes — and more secrets

Hear spoooooky ghost stories about the gardens' past as a cemetery, its crucial yet forgotten role in shaping Melbourne as a signalling station and more on this guided tour by Royal Historical Society of Victoria experts. If you dare!

Learn also Flagstaff Hill's place in Melbourne’s topography, pre-European history and its fascinating role as a magnetic and meteorological observatory.

It's an absolute "must do" for understanding the history and character of Melbourne.

Re-live Melbourne's maritime history aboard the much-loved Enterprize. Sail Victoria Harbour and learn about the ship's role in Melbourne's founding.

The Enterprize is the focal point of the spectacular Melbourne Regatta, held annually during Melbourne Day week.

Few class excursions are as exciting and engaging as setting sail on the Enterprize.

Metro’s Dumb Ways to Die Opens in new window is a highly-acclaimed and award-winning "be safe around trains" awareness program.

Metro also has experts who come to your school and community group to talk about safety, travel and trains.

State Library of Victoria's early Melbourne and Victoria teaching and learning resources are supported by a range of activities.

Who "founded" Melbourne? (PDF), part of The Making of Melbourne resource kit, was produced especially for schools by the City of Melbourne and Melbourne Day Committee.

It includes a teachers' guide, student materials and activity sheets to bring to life the story of how Melbourne started.

The exhibition features more than 1200 objects from Museum Victoria’s collection, making it the most complete and object-rich exhibition about Melbourne ever staged.

Come nose to nose with legendary racehorse Phar Lap, ride in a restored Luna Park Big Dipper carriage, step into workers' houses from the 1890s and hear the sounds of Melbourne's music scene. See how where you live evolved from traditional Kulin lands to the suburbs of today.

Learn more about how the city was founded and the early days, the gold rush, the 1880s boom, the 1956 Olympics, and more in this fabulous online tour. 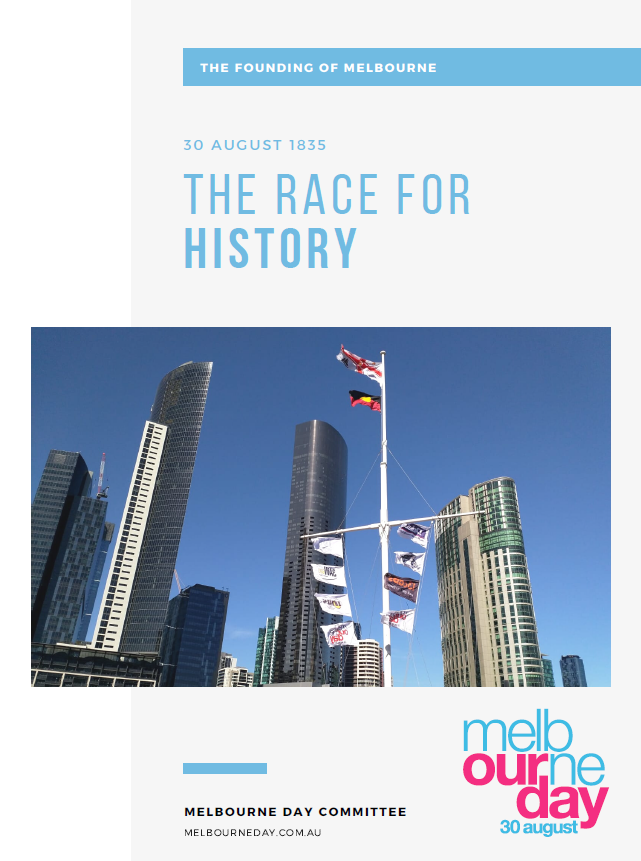 The Founding of Melbourne: The Race for History is a 14-page book telling the story of who founded Melbourne and why.

Free, fun Melbourne Day activities for teachers in classrooms, and parents at home, are available as downloads. See the Join in page.

All you need to know about Melbourne Day and the founding of our city: FAQs, facts and more, see the About page